Our offices, warehouses, and crews are located in Rhode Island, Massachusetts, and Connecticut

One pipe steam systems are a prevalent means of heating in New England. Over the years most of these systems have seen conversions from coal to gas or oil, and boilers have been updated. Most of the systems date from the turn of the century, however, the distribution systems have remained the same (unless a well-intentioned but misinformed tinkerer meddled with the system!). A typical one pipe system should operate around 2psi and be controlled by a single thermostat.  When the boiler comes on, steam pressurizes the system pushing air through the pipes which escapes through vents on distribution lines and radiators, in turn heating the building. When the thermostat is satisfied, the boiler shuts down, steam condenses and air is drawn back into the system through the vents. 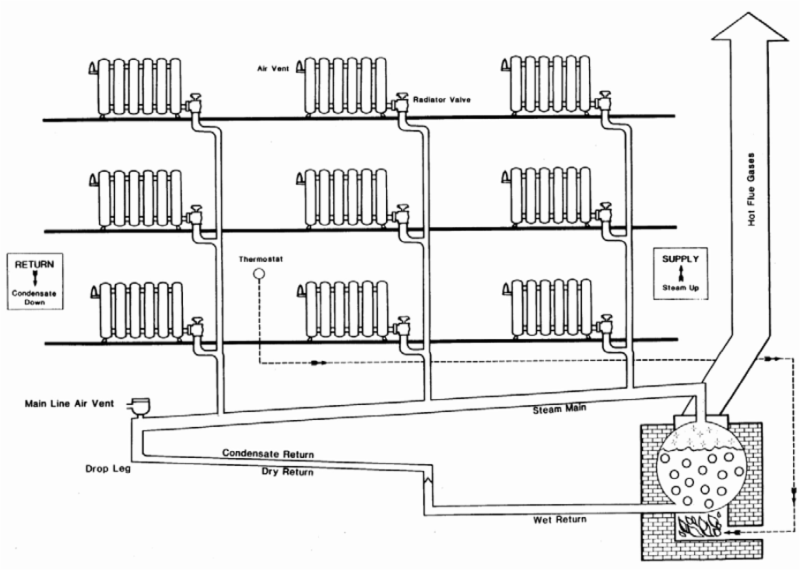 The major cause of energy waste and discomfort in one pipe systems is due to uneven heating. Uneven heating can be remedied by addressing main vents, radiator vents (fixed, adjustable, or thermostatic), and boiler controls. It is also possible to see major improvements in the system by educating tenants on their heating system. For example, valves to radiators must be either fully open or fully closed which will resolve many water hammer issues. It is also important for tenants to inform building management if they are forced to open windows due to overheating. Overheating can generally be resolved easily and economically.

Questions? Need and estimate? Anchor Insulation started out as a small pipe insulator in 1980. We are well skilled at industrial and commercial insulation applications. Wrapping and insulating ducts, pipes, tanks and more. Give us a call today!

All Rights Reserved © 2014 Anchor Insulation
Go Back to Top ↑